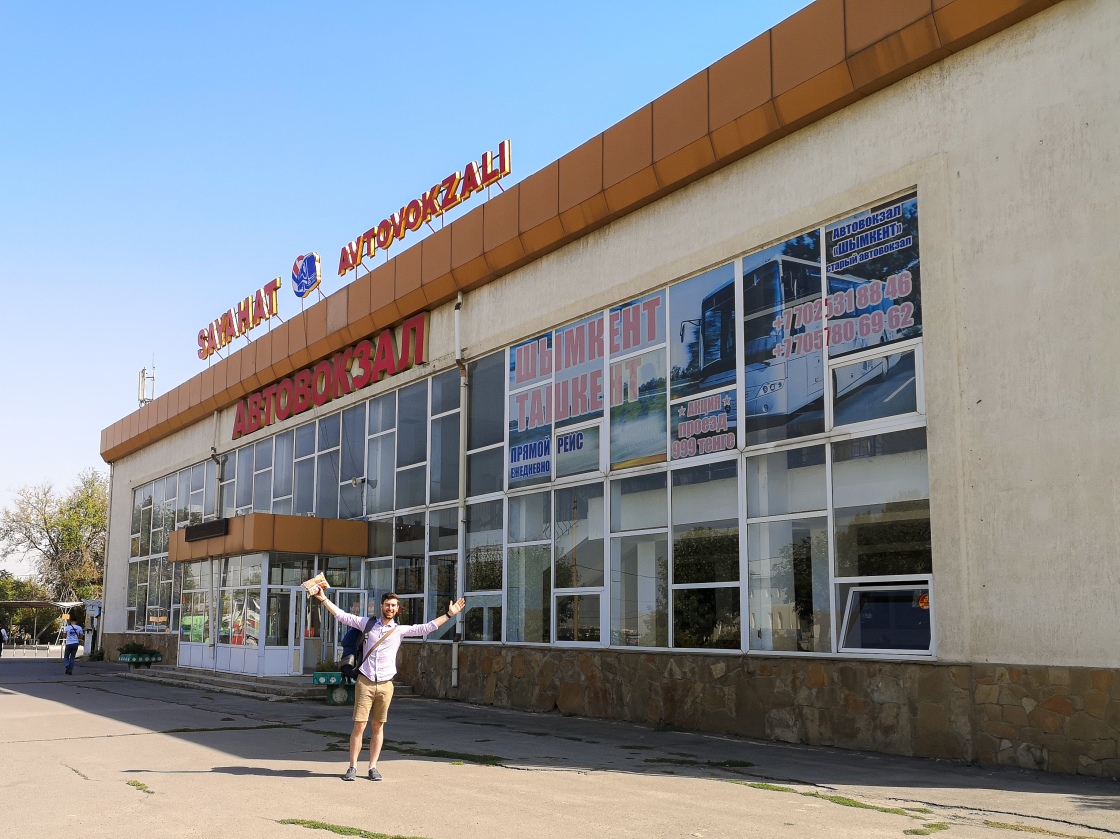 How to travel between Tashkent and Shymkent by bus

Tashkent, Uzbekistan’s bustling capital, is tantalisingly close to some of the other ‘Stans’ – in particular, the southern borders of Kazakhstan. Given that we love a good land border crossing, it would have been rude not to make the most of this opportunity – so a quick border hop from Uzbekistan to Kazakhstan was added to our travels in September 2019!

Getting the bus from Tashkent to Shymkent

After a bit of research, we settled on a short visit to Shymkent – Kazakhstan’s third biggest city – which is accessible from Tashkent via a dedicated international bus service. We had high hopes for this route – publicity from its launch back in January 2018 mentions that:

So, the route promised great things – but how was it in reality, a mere 18 months after the launch? Is it still possible to travel easily between Tashkent and Shymkent? Let’s find out!

What time do the buses run between Tashkent and Shymkent?

Although originally advertised as an hourly service between 6am and 8pm, when we visited (September 2019) the bus from Tashkent to Shymkent ran 5 times per day, whilst the return from Shymkent to Tashkent was even more sporadic, setting off just 3 times each day. In our sleep-deprived stupor, we cleverly forgot to take a photo of the timetable – but did remember to write down the times:

The bus is scheduled to take 3.5 to 4 hours, which does not include the 1 hour time difference (Kazakhstan is ahead of Uzbekistan). There is a Facebook page for the bus route which has vaguely up to date times – it can be accessed here, although it’s worth keeping in mind that (at time of writing) it was last updated in November 2018.

The timetable above shows the direct buses to Shymkent, but we unintentionally ended up on the 16:00 bus to Turkestan, 160km further North into Kazakhstan. The bus makes a stop in Shymkent along the way, but – unbeknown to us – instead of taking you to the bus station, it skirts around the edge of the city before dropping you off on a busy road. This wasn’t particularly a problem, as there were plenty of taxis around, but if you do end up on the 16:00 service then we’d definitely recommend that you keep checking where you are on your phone’s GPS to avoid ending up another 3 or 4 hours further up the road in Kazakhstan!

How do I buy tickets for the bus?

Tickets can be easily purchased at both bus stations.

For services departing from Tashkent, the tickets can be bought from the Autovokzal Tashkent – the bus also leaves from here. The Autovokzal is located a short walk from the main passenger train station, and can be accessed from Olmazor Metro stop. As of September 2019, a ticket purchased from the Uzbek side costs 40 000 som ($4).

In Shymkent, the bus station for this route is Shymkent Autovoksal on Kurnakov Street, close to Independence Park. It’s within walking distance from most of the city center, although a taxi should be able to take you there for relatively little. Tickets can be purchased directly from the Autovoksal, and departing from the Kazakh side costs 1700 tenge (also $4).

Neither journeys were luxurious, but nor was there too much to complain about – it was absolutely fine for the length of the trip. These are large 50-seater coaches, with reclining seats and decent amounts of leg room – although leather seat-backs are a bonus rather than a given! Neither of our coaches benefited from air conditioning – so we’d definitely recommend packing plenty of water for the trip (or even a portable fan) if you’re travelling in summer, although keep in mind that a working toilet is not guaranteed on-board! Don’t go polishing off a full 2 litre bottle just before your journey!

What should I expect at the border between Uzbekistan and Kazakhstan?

Don’t let the reduced timetable or lack of leather seats on the bus deceive you – the USP of this route is that it passes through the ‘green corridor’ at the border between Uzbekistan and Kazakhstan, avoiding the queues and drastically reducing your waiting time. It’s well worth it just for this time saving.

As you approach the border in either direction, you’ll first notice the lines of cars waiting to be let through. By the time you get close to the gates which guard the inspection area, this trickle of cars becomes a seemingly endless sea of vehicles which the bus weaves straight through, horn blaring. When you reach the front of the queue, the gates will mysteriously open – as if by magic – for you to pass through for your priority inspection.

At this point, passengers have to get off the bus and take all luggage to border control, where it is passed through a scanner after a thorough passport check. The luggage inspection in particular can take a while, as the buses can be used to transport all sorts of goods – we had a local chap on one of our buses who had almost a full trailer of building materials with him!

This meticulous inspection happens at both Uzbek and Kazakh border control, and you shouldn’t need too many guesses to figure out why they’re so thorough (hint: drugs). The 15-20 minute estimate for border formalities mentioned in the promotional articles is definitely optimistic – both times we were crossed, it took more like 90 minutes. However, this is a vast improvement on how long you’d be waiting if this bus didn’t exist!

The officials on both sides of the border found our British passports to be a good novelty, and were accordingly helpful and friendly. An unexpected quirk when passing through Uzbek border control saw women going through before the men – cue a confused Lucy meandering around without a clue what was going on. We also had to complete a migration card at Kazakh border control, but this just asked for fairly standard details – put the name of your hotel as the ‘inviting organisation’ and you shouldn’t have any issues.

Shortly after crossing the border on the Kazakh side, a money exchange person will board the bus – this is a good opportunity to get enough local currency (at reasonable exchange rates) to tide you over whilst you search for a working ATM! The same will happen on your return journey, and you might as well take advantage before sitting back and enjoying the rest of the ride.

So, whilst the international bus route may not be quite as fancy or frequent as the original publicity suggested, it does work very well for both locals and travellers alike. Shymkent may not have the objective beauty of Uzbekistan’s silk road wonders, but it’s certainly worth jumping over the border if you find yourself with a spare day or two. We’d certainly recommend the bus between Tashkent and Shymkent – you’ll get all the fun of a Central Asian border crossing without having to wait in the infamous queues!