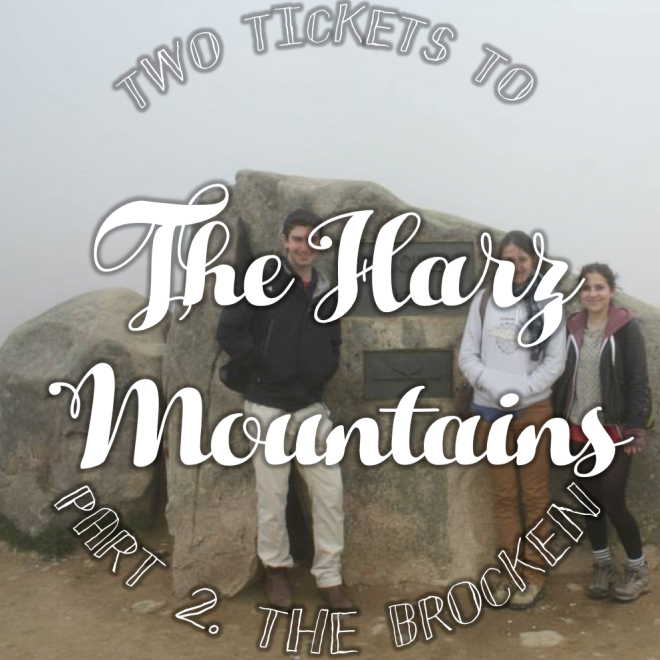 Two Tickets To… The Harz Mountains, Germany! Part Two: The Brocken and beyond…

Brocken, Germany, Harz Mountains, Travel, Walking by Two Tickets ToNovember 16, 2015April 30, 2016
Here we have Part Two of our Harz Mountains trip! Featuring the Brocken, a cabin in the woods, and a sunburnt French person….

Saturday was the day we’d all been waiting for – time to conquer the highest mountain in the Harz, the Brocken. We donned our finest walking gear and set off on the arduous path to…the train station! The Brocken, in a similar fashion to Mount Snowdon in Wales, has its own railway line up to the top. Normally we would both consider this the height of laziness, but the line is famous in its own right and is operated by a classic old steam train – so we decided to take the lazy route up, and walk back down.

We weren’t quite sure what to expect when we stepped on the train. To be fair, it’s not really something you’d give much thought to, is it? A train is a train – and between ourselves and Marion, we’d probably been on thousands. The Brockenbahn, however, is not like any other train – and here’s why:

Firstly – the scenery. The journey begins in the pretty town of Wernigerode and takes you up through the dense forests which cover the Harz, before you eventually break through the tree-line and find yourselves with (potentially) miles and miles of Germany stretched out beneath you. Speeding through the countryside on a steam train, on the way to the top of a mountain, was brilliant – and the experience was made even better when we realised we could stand outside on the ledge between the carriages. We had to wrap up very, very warm – but we spent the rest of the journey outside, enjoying the sense of freedom.

Secondly – the alcohol?! Upon boarding the train it became quickly apparent that we were among the youngest travellers, by quite some distance. We imagined this meant it would be quite a sedate journey. How wrong we were. It wasn’t long before the first crate of beer emerged, seemingly out of thin air. Conversation flowed, jokes were told, and the laughter got steadily louder. To add to the festivities, people were walking up and down the length of the train selling local spirits in small bottles for a euro each. They seemed to be doing a roaring trade, and we decided it’d be rude not to join in. We stocked up on “Feuerstein” and embraced the experience – it wasn’t quite a ‘party train’, but certainly more lively than we’d have expected. Especially considering that, amusingly, it was 10:30am. Once again, Germany, we salute you.

By the time the Brockenbahn rolled up at the top of the mountain, temperatures had dropped to what felt like freezing, and thick fog had rolled in. It was so dense that there was no chance of seeing anything resembling a ‘view’, but it made for a fun atmosphere nonetheless. Later research on Wikipedia informs us that the peak is covered in fog for 300 days of the year, which makes us feel slightly better.

We stepped off the train (others, I imagine, staggered) and began exploring. The Brocken is quite a gentle, sloping mountain – which means the peak covers a lot of area. There’s enoughh room for a café/restaurant/bar, a weather station, a TV tower, a stone circle, and a visitors’ centre which is located on an old Stasi (East German secret police) surveillance station.  We located the trig-point/marker stone and got our obligatory photographs, before wandering over to see the visitor’s centre. On the way – guess what we found?! That’s right, another Heinrich Heine reference (see Part One)!!! This time, it was a giant stone dedicated to the great man. Even if we had had the worst journey up of all time, finding a 6ft + bust of Heinrich would have made it all worth it.

Heinrich, the man who inspired the trip!

Soaking up the sun….

We had to recover from the excitement of coming face to face with giant Heine by grabbing a warm drink at the café (hot chocolate for Lucy & Marion, Glühwein for Matt – 6 months too early/late). Batteries recharged, it was time to begin the walk back down the hill to Wernigerode, from where we’d try and find our spontaneously booked cabin for the evening. We were soon glad that we’d decided not to do the return leg by train as well – we’d have missed so much that you can only appreciate by taking things at a slower pace.

Once we’d walked for 30/40 minutes or so, the crowds had well and truly thinned and we found ourselves pretty much alone on the paths down. The weather had also improved – the fog lifted and the sun came out! It became a perfect spring afternoon, with only the sound of our footsteps and the birds breaking the silence. Further down the hill, we came across a river where Matt and Lucy introduced Marion to the very British game of ‘Pooh Sticks’, where you race sticks under a bridge. Instead of sticks, we used pinecones – but it turns out they’re quite difficult to tell apart. Who knew?!

Further entertainment was to be found once we’d reached civilisation again. To our excitement, amusement, and general confusion, we stumbled across the “Brocken Coaster”- a brilliantly tiny rollercoaster which takes you through the trees at crazy speeds of up to 20mph (at an estimate). It was almost certainly designed for a ‘younger’ age group than us, but that didn’t stop Matt taking the plunge and paying 5 Euros to give it a go. Lucy and Marion watched from the sidelines before presumably deciding they were embarrassed to be there and running away. Matt found them hiding in a churchyard. Moving swiftly on….

We felt like we’d walked miles (which we had, to be fair), and took one last pit-stop in a café before beginning the final leg of our journey to the cabin. For the life of us, we can’t actually remember where the cabin was. All we know is that it was near to a hotel, at the bottom of a quiet valley, in the middle of some woods. In the Harz, that doesn’t exactly narrow it down much. Ah well.

Eventually we found it, and very nice it was! Even better, there was a nice looking restaurant nearby, so we dumped our stuff and loaded up on more classic German food (i.e. more Schnitzel) before heading back to the cabin to put our feet up. Matt had bought a full-sized bottle of the aforementioned ‘Feuerstein’, so we battled through a bit more of that whilst listening to classic tunes such as Five’s “Keep on Movin’” and the Circle of Life. Eventually we decided that it would be much more fun to go on a midnight walk in the woods – which lasted until everyone had spooked each other with talk of ghosts etc. Back to the cabin for some much needed sleep!

‘Going home day’ is always quite a sad one – knowing that you’ll be heading back to the normality of life once you’ve packed your bags and handed back your keys. This was no exception. It was a shame to be leaving the Harz after such a short amount of time there, but we were all quite happy with the amount that we’d seen and done over the weekend. There was once more night at Lucy’s to look forward to, before people started going their separate ways again.

When we got back to Lucy’s town of Bad Salzdetfurth, it felt like spring had definitely become early summer – the weather was amazing! Despite our legs being quite tired from the previous two days’ efforts, we set off for another wander into the countryside. It’s not quite the tall hills and thick forests of the Harz, but it’s still lovely rolling countryside and green fields! The self-timer setting on Lucy’s camera was whipped out, and group photos were taken.

We got back to Lucy’s and decided we were all exhausted – so a film night was declared. There wasn’t much to choose from. In fact, there was only one choice. Pitch Perfect was the only DVD that Lucy had brought to Germany, so we got changed and stuck it on. The chances are that we were all asleep before the end. Oops….

In the morning, Lucy had to head to work just after 7am. She returned shortly after 10am, only to find Matt and Marion still asleep. It had been a long weekend! Matt had to bid farewell early in the afternoon to catch a train back to Dortmund, whilst Marion wasn’t leaving until the next morning. Her and Lucy made the most of their time as a two by…going on another ridiculously long walk! After catching a train to Hildesheim, they ended up walking a half marathon back in the glorious sunshine. All was well until Marion discovered that she was sunburnt, whilst Lucy had begun to tan – not quite the way round you might expect with the French and the English!

Tuesday came, Marion departed for Paris, and the Harz trip was over. It had been a brilliant weekend, and we’d certainly made the most of the short time we had. The beauty of the German countryside is quite often underrated, but we’d challenge anybody to visit the Harz and not be impressed by what it has to offer. It is a truly beautiful region, and we didn’t even discover half of it. We’d love to go back at some point and properly do it justice!