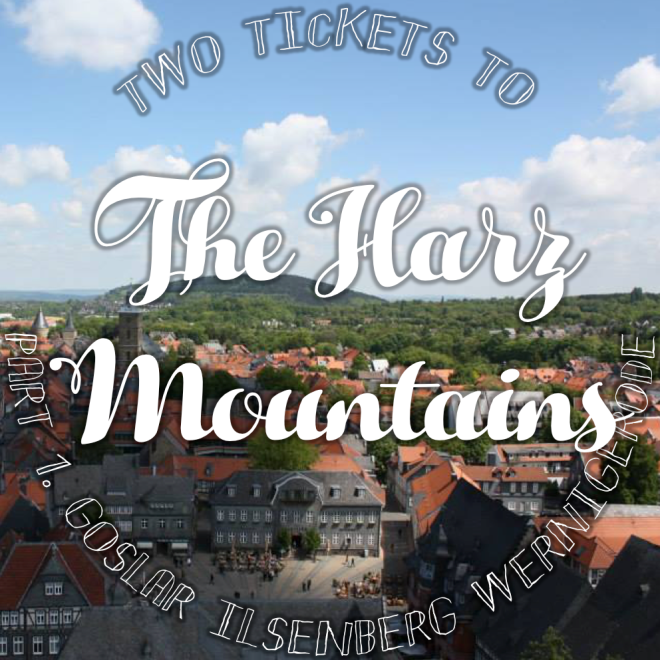 Two Tickets To… The Harz Mountains, Germany! Part One: Goslar, Ilsenburg, Wernigerode and lots of walking….

This is a bit of an oldie – a trip from May 2014 which we never got round to writing up. We were both living in Germany at the time, and Lucy was based near Hildesheim, on the edge of the Harz Mountains. As part of our University course, we had studied ‘Die Harzreise’, a travel narrative by German Romanticist Heinrich Heine, which describes his journey through the mountains.

Full marks to anybody reading this who actually knows what we’re talking about! Needless to say, the opportunity to re-enact ‘Die Harzreise’ was not one to be missed, so we were excited to organise a long weekend to follow in Heine’s footsteps.

Thursday was definitely a day for making sure that everyone was in the same place – which basically involved hoping that Deutsche Bahn (the German train operator) didn’t completely screw up. Anyone who has lived in Germany for any length of time will know that DB trains have the potential to be hours late – or even cancelled completely. Matt, travelling from Dortmund, had a few hours on the trains to contend with – and we were both very excited to be joined by our friend Marion, who we hadn’t seen for nearly a year!! Marion was getting the train all the way from Paris – which is an impressive level of dedication! Thankfully for all three of us, DB was running a good service – and we all arrived in Hannover within half an hour of each other!

We had a quick wander around Hannover – a typical West-German city which we might write about at a later date – and then headed to Lucy’s flat, in the small but pretty town of Bad Salzdetfurth, where we’d be spending the evening before making our way into the Harz. The rest of the day was taken at quite a slow pace, given how far some of us had come.

Firstly, and importantly, we took quick trip to Rewe to stock up on typical German food like pasta, olives, and baked beans (we jest – baked beans are considered a luxury and cost about £1.50 a tin!). On the way back, we took a speedy tour through the middle of the town – lots of cute bakeries, and interesting old buildings that used to hold the mining guilds. It’s hard not to fall for the charm of the place!

The grand tour of Bad Salzdetfurth complete, we had a whole evening to catch up and plan the weekend’s activities. We had nothing booked, so we had the chance to be spontaneous – definitely one of the best sorts of travel! We settled on an itinerary for the morning, and a hotel to stay at overnight, and headed to sleep.

Today was the day that we finally set off on our very own Heinrich Heine’s inspired Harz trip! Our first stop was Goslar – an incredibly pretty town which Heine himself visited and liked. Lucy had been before, but was excited to return, and it was a new place for both Marion and Matt. Exciting times!

If we had to describe Goslar in one word, it would be ‘slate’. A quick climb up the old church tower gave us a view over the entire town, and slate roofs were definitely the predominant choice. Amusingly, we were at the top of the tower when the bells struck – it was still quite a shock, even though we all knew it was coming! Matt decided it would be sensible to sit on the floor of the tower, to ensure the sound didn’t make him jump and tumble off the tower. To be fair, he survived – so it’s hard to argue with his logic…

After the obligatory walk to Goslar’s palace, which looks quite Hogwarts-esque from the outside – we headed back to the station to get a train to Ilsenburg. This is yet another pretty little place, but also the start point for a walk up to the Ilsestein – which was, of course, featured in ‘Die Harzreise’. The Ilsestein is a giant cross at the top of a cliff, overlooking the Harz. We naively though it’d be easy to find. It wasn’t.

In hindsight, setting off from the bottom of the valley, and following a path that followed the river which cut through said valley, was perhaps not the smartest move when you consider that we already knew the Ilsestein was found on the top of a cliff. Nonetheless, we thought we’d find a fork in the path which would lead us straight to it. And a signpost, which would point us in the right direction. And that we’d actually be able to see a massive cross overlooking the valley. It turns out that all those assumptions were spectacularly wrong.

For a start, the Harz mountains are covered – for the most part – in quite dense woodland. This valley was no exception. It made for a stunningly pretty woodland walk, but unfortunately meant there’d be no chance of spotting the Ilsestein from below. It also became pretty apparent that there was no fork in the path, and no convenient sign-posts. However, we had kept seeing references to Heine throughout the day – pubs, street names, information boards – if that wasn’t a sign that we’d find then Ilsestein, then we don’t know what is!

We knew that Heine would never have let a lack of signposts and paths stop him from reaching his goals, so we decided to go off-road. Matt had a ‘hunch’ that if we just climbed the hill and got out of the trees, we’d be able to see what we were looking for – so, arming himself with a giant stick and declaring himself a ‘Gandalf’ figure, he lead the exploration party off the path and into the woods. The Gandalf stick turned out to be quite a useful tool, as the hill got increasingly steep and the ground increasingly slippery. Oh, and we weren’t exactly dressed for ‘proper’ hiking. I’m pretty sure jeans were being worn.

Eventually we broke through the tree line, and incredibly spotted the Ilsestein on a cliff above us to our left! With Gandalf feeling smug, and everyone else just relieved that the scramble through the woods wasn’t a waste of energy, we traversed our way to the cross. Marion chose this as an excellent time to declare that she has a fear of heights. Oops, sorry Marion. The view when we arrived made everything worth it – miles of trees and hills beneath us. The Brocken, the highest mountain in the Harz, loomed over the valley in the distance. We stayed for a while to rehydrate, recharge, and – of course – enjoy the view, before trying to find a route back to the town that didn’t involve wild woods. To our amusement, we found an actual road – a tiny country lane, but a road nonetheless – about 2 minutes from the Ilsestein. It would have been a much easier walk up, but not half as fun – we appreciated it being there for the journey down though!

We arrived back in Ilseburg, and jumped on a train to Wernigerode, where we’d be spending the night. Wernigerode is another brilliantly pretty little town, nestled in the Harz within sight of the Brocken. It’s also the departure point of the Brockenbahn, a picturesque steam train line which we planned to take to the top of the mountain the following day. What’s more, it’s home to an even more Hogwart-esque castle – the imaginatively named ‘Schloss Wernigerode’ – which enjoys a commanding position overlooking the town from the top of a hill. It’s an impressive sight, and it was a real shame that we’d arrived too late to go and visit it. Considering how much climbing up hills we’d done already that day, maybe it wasn’t a bad thing!

Unsurprisingly, an appetite had been built up, so we checked in to our hotel room and headed out for dinner at the most German looking place that we could find. We settled on one, and were excited when we saw a plate of ‘Spargel’ taking pride of place on the menu. Late spring is ‘Spargel’ (basically, white asparagus) season in Germany – they are absolutely obsessed with the stuff to the extent that street stalls will be build, billboards go up, and restaurants will serve Spargel as a meal in its own right. Matt and Lucy, having experienced the Spargel frenzy during their time in Germany, were quite familiar with the phenomenon – but it was no less amusing. It was the first time Marion had come across it, and we recognised her confusion. We’d been in the same boat a couple of months before. Nothing can prepare you for the German obsession with Spargel.

Naturally, we ordered a plate for us all to share, and each of us ordered a more normal/safe/not asparagus based main course. We can’t quite remember, but it was almost certainly Schnitzel. The Spargel arrived, and was very nice – you can’t go too wrong with asparagus, but the thought that an entire plate of it constitutes a normal main course takes some getting used to. Germany, we salute your eclectic taste in foods!

Dinner eaten, we headed back to the hotel to decide the itinerary for the next day. We knew we were going up the Brocken, but we’d planned to go straight back to Lucy’s afterwards. We’d only planned – and budgeted – for one night away. Unfortunately, the wine at the restaurant was quite nice. And things always seem like a great idea when you’ve got a combination of good wine and good company. Aghast at the thought of having to leave the Harz straight after going up the Brocken, we booked a night in a cabin. Yes, an actual cabin in the woods. No regrets.

With accommodation for tomorrow’s adventures sorted, it was time to finally get some sleep after quite a long day. Stay tuned for our trip up the Brocken in Part Two!